In our first article, we established the benefits of strength training for youth athletes, and so now we want to break down the most desirable athletic physical qualities for sport. We have identified key actions of the body that, when performed in an assorted sequence, lay the foundation for all athletic movement.

The key movements include:

As an athlete, movement as a skill should be of upmost importance. Athletes are thought to display the epitome of human movement, so much so that sporting competition is essentially based on which athlete or team moves in the most optimal way.

Throughout sport, from hitting a tennis ball with a racquet, to dunking a basketball, or swimming freestyle in the pool, your body will perform various combinations of movement patterns to complete the action.

It is important that before we start to perform complex multi-movement exercises under heavy load, we first must cover the basics (see the list above).

When we first learn a new movement pattern, we should always start at the most basic level and progress from there in order to allow our brain to truly understand what your body is doing.

Consider the follow athletic movements as just another skill for the brain needs to learn, like when you first learnt Maths at school – you didn’t start Maths with complex algebra equations, you started with basic addition, subtraction, division and multiplication and as you mastered those the equations became more complex, but you were able to eventually answer them through the basic skills you learnt earlier.

By mastering our key movements, you’ll be opening new avenues of potential performance improvements that later down the track will benefit you as you come up against higher level sporting competition. 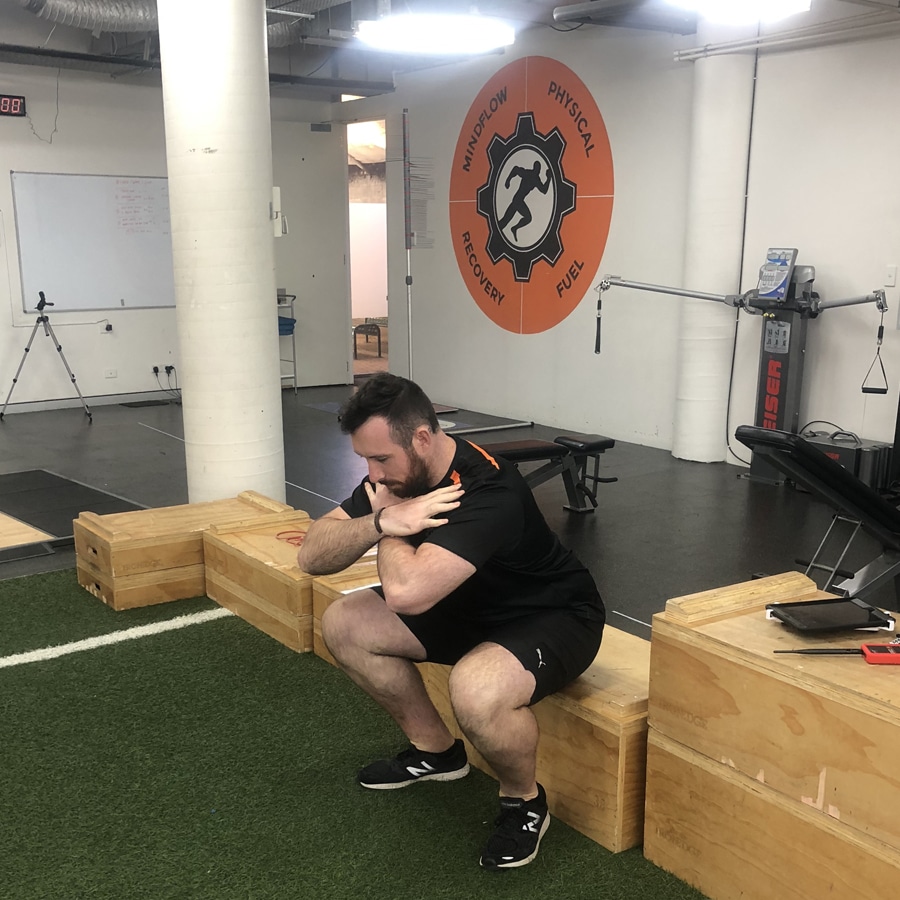 The squat is a simple exercise that will lay the foundations for any lower limb movements that have the capacity to greatly enhance your strength, power and explosiveness. The “sitting into a chair” motion of the squat will strengthen the muscles and structures around your ankles, knees and hips meaning as you get stronger there, you’ll be able to run faster, jump higher and generally move better. 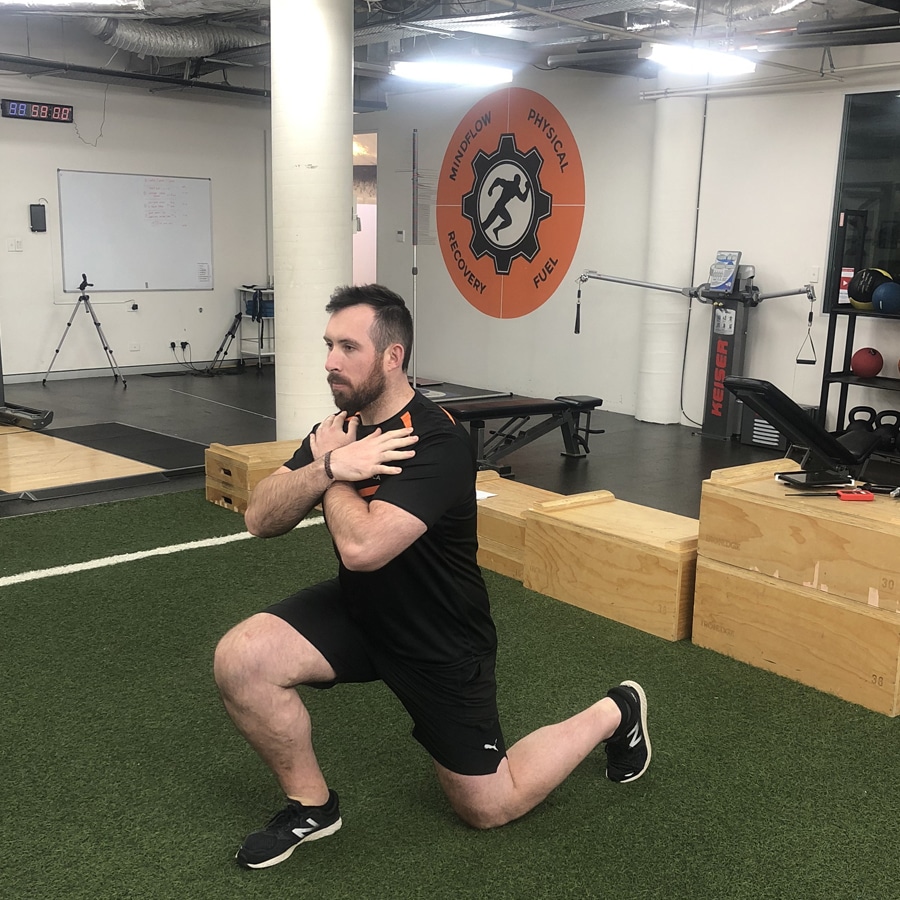 Mastering this single leg movement will promote stability and strength in your knees, hips and ankles whilst promoting your ability to push off and balance on one leg. This can be important in movements such as running, jumping from a moving start and changing direction. 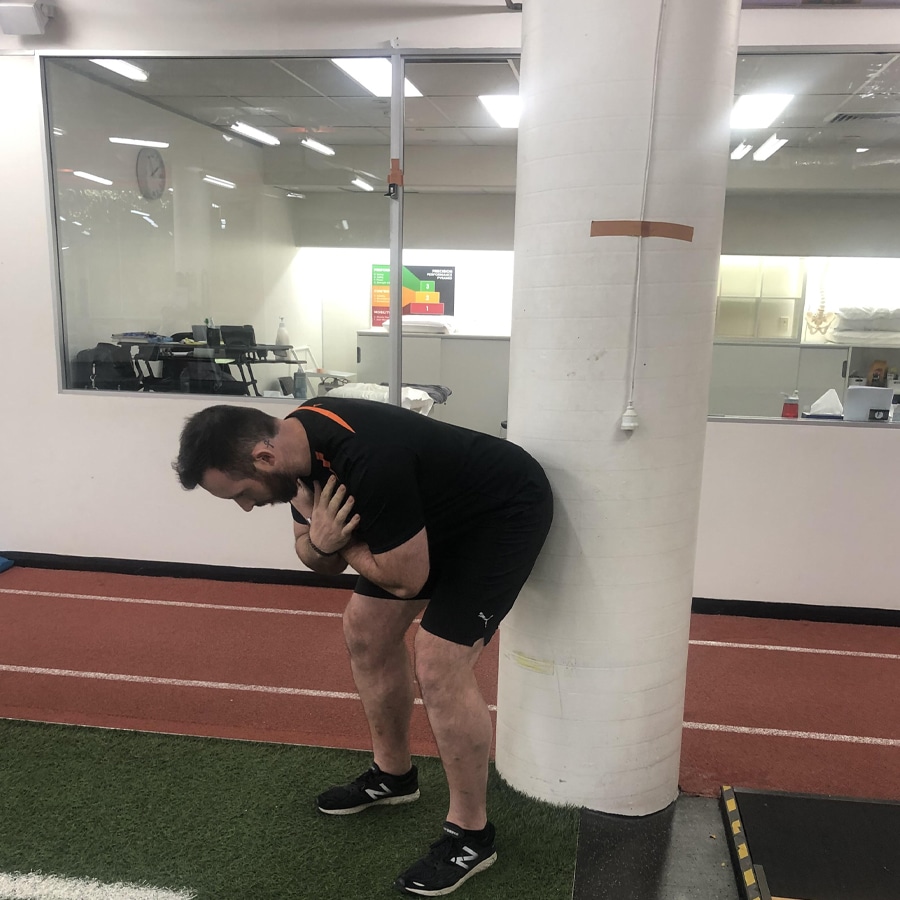 The hinge movement will help strengthen the muscles that run up the backs of your legs, which will help in moving you both forwards and upwards. By strengthening these areas, you will be able to run quicker, jump higher and it will also help with rotation actions such as throwing, changing direction or swinging an instrument. 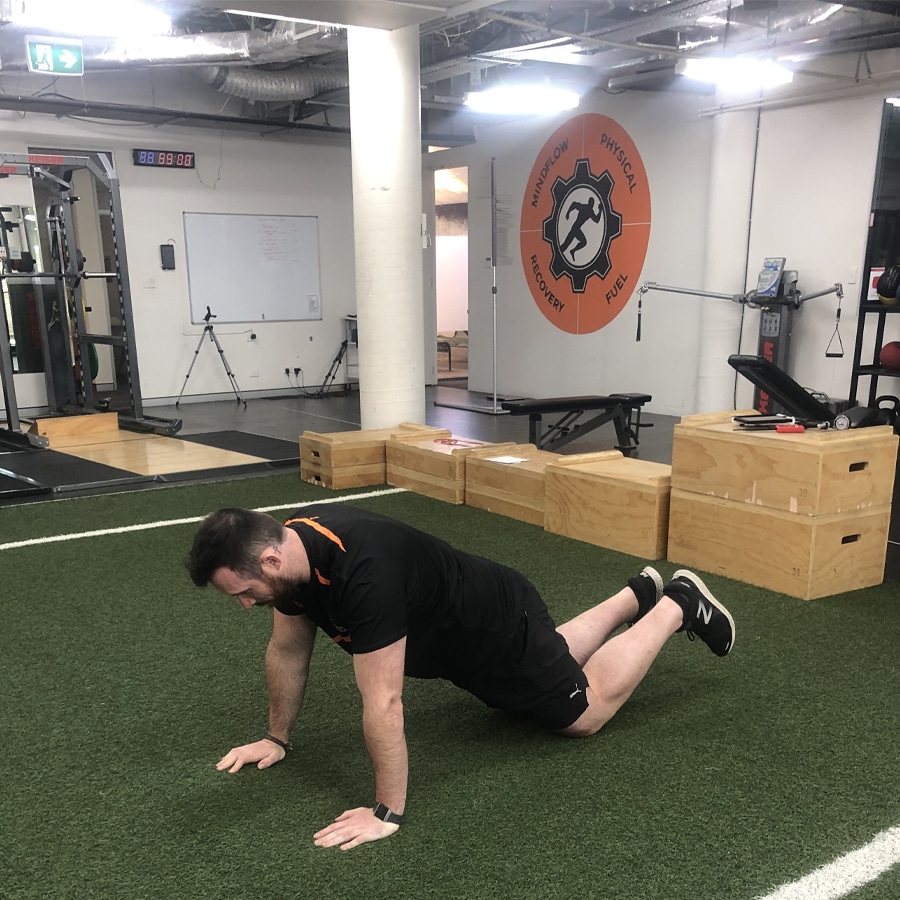 Your first upper body dominant movement, this action will aim to strength the muscles and structures that run through your chest, shoulders, arms and trunk. Push exercises will also begin to create a link between trunk stiffness and upper body strength, important in movements such as throwing and tackling.

Basic exercise: Push up on Knees 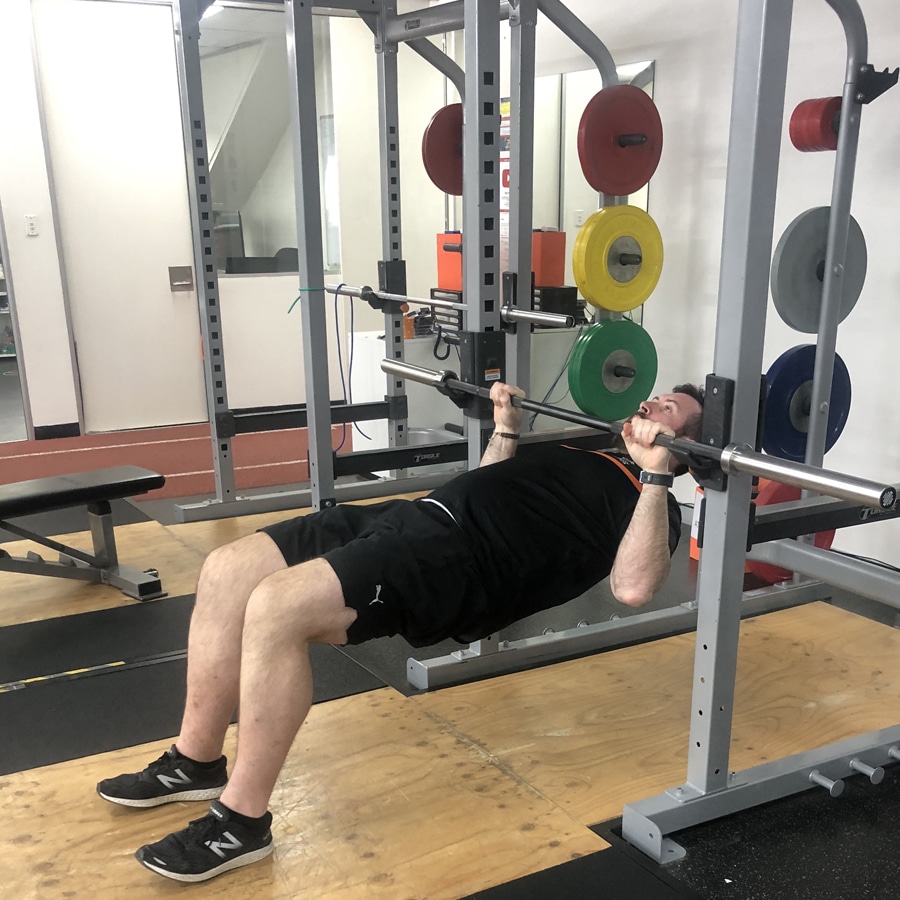 Pulling movements will train the muscles that are located through your shoulder, shoulder blades and back. These are important in promoting good posture and strong structuring around your spine to prevent back injuries, in turn enhancing your ability to withstand force. 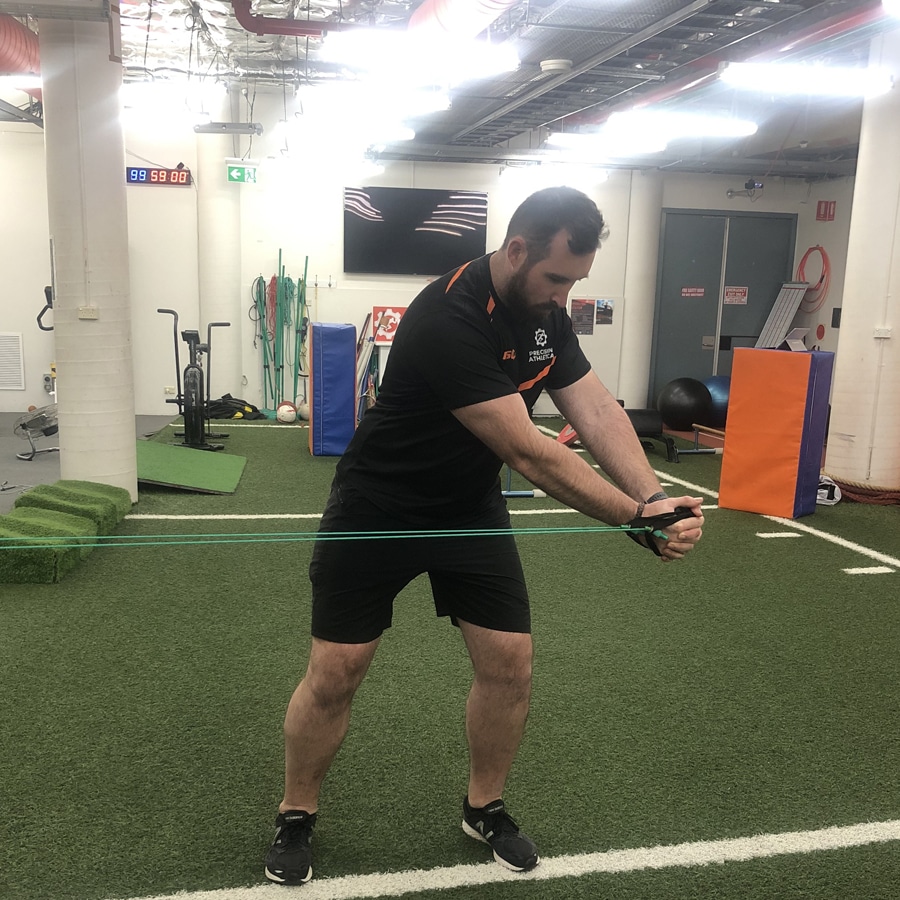 Rotation movements will train your ability to merge a range of the actions listed above, blending combinations of hinging, lunging and pushing to produce a powerful movement pattern that is present in practically every sport. The action will also teach your body how to transfer strength and force from lower to upper body effectively.

Anti-rotation exercises will work in partnership with Rotation movements to help transfer the strength in your lower limbs to your upper limbs or vice versa, by improving the stiffness and strength of your trunk. These actions can be seen in movements such as throwing, kicking, running and jumping.

So those are the key movement patterns to start with when looking at strength training for youth athletes. Once they are understood and can be completed with sufficient quality, you would next start to build them into a training program and below we have listed an example of how this could be structured.

The following program can be used by youth athletes as an introduction to strength training. In terms of frequency, this could be completed 2-4 times per week dependant on the age and maturity of the athlete:

Please note that the above program and advice is written in a generic form and we would always suggest that for peace of mind and best results, you take your child to see a suitably qualified and experienced trainer, prior to commencing training.

At Precision Athletica in Sydney, we by way of course always start by conducting thorough assessments of all junior athletes, along with getting a full medical and training history, in order to them determine their level and where is appropriate to start them.

Should you wish to bring your son or daughter to Precision Athletica for an assessment or to train, you can do so by calling our team to book an appointment: 02 9764 5787 or if you would prefer, you can book a free 15 call with our high-performance team to discuss.

The author of this blog

This post was written by Precision Athletica Strength & Conditioning coach, Jackson Privett. If you would like more information or to book a session with Jackson, please call us on 02 9764 5787, or you can email Jackson directly: jackson.p@precisionathletica.com.au

FREE: 10 Key Habits Of Elite Athletes
That Will Change Your Game Right Now!

Our team approaches your fitness from all angle to improve athletic performance.